Yet another legacy post today folks, this one from March 2008 – almost exactly 13 years ago! It’s a subject upon which I reflect regularly, particularly when driving to do a day’s teaching in school. I’ve been doing that journey for 22 years now, and I still occasionally get an almost overwhelming feeling of how responsible it is – in some small way, I guess I’m shaping young lives. It’s why I strive to be the best teacher I’m capable of being. That’s another story for another day though. In the meantime, I hope you enjoy my first ever reflection on Defining Moments. 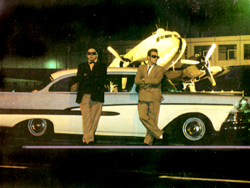 Welcome back folks after far too long a break.  Here I am, another year older and closer to the grave.

As a result of reading some excellent biographical writing recently by Alan Bennett the playwright and Michael Simkins the actor (and brother of oft-mentioned saxist Geoff) I thought I’d have a bash at writing about ‘defining moments’ in this entry.  These are events in one’s life that seem to shape the way you feel about things or approach things for the rest of your  days.  Interesting, personal, and highly blogworthy stuff I thought.

Everyone has their own ‘defining moments’ but today’s hectic pace of life doesn’t offer us much chance to reflect on them, so we often don’t realise they were defining moments until years later.  Thank goodness for out-of-town gigs and the long drives thereto!

I suppose my first tale begins at a family wedding (my mum’s cousin I think) when I was a young kid.  This would’ve been in the late 1960s and at the tail end of the era when people booked ‘busking’ bands for wedding gigs.  It’s probably worth adding here that ‘busking’ doesn’t mean they had an upturned hat in front of them, they just didn’t use formal written arrangements.   Anyway, there I was at the wedding doing what kids at weddings do best, i.e. skidding across the polished floor on my knees and ruining the smartest outfit my mum could find for me.  (It wasn’t much fun at the age of six going to a wedding dressed as a Japanese Admiral…)

Anyway, I digress:  the defining moment came when the band struck up.  I’d heard my father playing standards on piano at home in a kind of quasi-stride pub pianist style complete with ‘lucky dip’ left hand.  Now my dad was the sax-playing band leader and, while the other kids continued to practise their skidding, I sat cross-legged on the front of the stage mesmerised by what was unfolding in front of me, and there I stayed for the remainder of the evening.  The more I think about it, that’s when the mould was cast.

A defining moment in the life of anyone of my generation must surely be the purchase of the first long-playing record.  I’m sure we all had 7” singles of novelty pop songs that our parents had bought us, but getting that first 12” disc with your own money made you feel like you’d arrived.  I actually can’t remember buying my first LP – I think I may have bought it aged about 13 from a classmate at school – but the memory of it is so vivid that if I close my eyes I could almost reach out and touch it.

The record was a compilation of Chuck Berry songs entitled ‘Motorvatin’, and the cover bore a front-on view of a bright red early 1950s Cadillac.  The music, to me, was so exciting, and the fact that my dad thought it ‘primitive shit’ made it more exciting still. (Teenage rebellion was alive and kicking!)  The damage was done, and I became a fanatical disciple of rock and roll, with this record along with the music from the film American Graffiti providing the soundtrack to most of my teenage life.  The photo above gives you an idea of what my teenage years were all about.  That’s me on the right aged about 19.

That my contemporaries were listening to the likes of Pink Floyd and Led Zeppelin merely strengthened my resolve to listen to (by then) 20 year old music, and I’ve never felt a need to conform since.

Almost thirty years on as a member of ‘The Rhythm Riot Kings of Rhythm’ I’ve been lucky enough to share a bandstand with some of the people I spent all that time listening to in my teens, and you know what?  It’s as exciting as you’d imagine!  As my chum and colleague Johnny Day says, ‘You can take the boy out of rock & roll, but you can’t take the rock & roll out of the boy’.

There’s a neat coda to the Chuck Berry thing:  By the time I was 15 or 16 I found myself at school in what’s probably best described as a no-hopers’ class for English lit – I achieved the lofty grade of ‘unclassified’ in my O-level.  This ‘leper colony’ comprised all the villains, psychopaths, under-achievers (me), and misfits (me) of my year, who were too hard, thick, lazy, or just plain bewildered to be interested in Shakespeare or poetry.  We were put in the charge of a huge rugby playing Welshman called Guy Tyler, an enthusiastic teacher who, frankly, didn’t deserve us.  His voice projection would have been the envy of many a thespian, and, as he was prone to occasional apoplectic outbursts of volcanic magnitude, winding the poor man up became something of a sport.

One day we ambled into our English lit lesson and one of the boys (a villain I think) had a guitar.  “I’ll take that thank you” roared Mr Tyler and we all expected him to add “collect it from the staffroom after school”.  But no, he took the guitar out of its soft case, and after a perfunctory tuning launched into Chuck Berry’s ‘Nadine’.  We sat in stunned silence, and when he finished he said “and that, boys, is poetry”.  Maybe that’s the defining moment when I subconsciously decided I’d like to teach.  *more about eccentric teachers in a subsequent blog

Incidentally, I did an interview on BBC Radio Berkshire just before Christmas (real Alan Partridge stuff) and ‘Nadine’ just happened to be one of the three ‘Desert Island Discs’ they asked me to bring in with me.

Lawks! I’ve written loads already and I haven’t even left school yet…

Is ‘defining moments’ a subject worth pursuing?  (or just a lexicographer’s whim?)  You decide folks; leave us a comment.

I’ll close briefly then with a real defining moment: Getting your first car.  I often think this is the singularly most liberating experience of a young person’s life.  It’s the first time you have a space that’s truly yours, and the independence to go anywhere the amount of fuel in your tank allows.    The world, as they say, is your ‘person who liberally peppers their conversation with yiddish words’.

My first car which I bought in June of 1980 was a Ford Anglia.  I just had to have a car with tail-fins, and that’s all my budget would stretch to.  (Although I was on the highest paid apprenticeship in the country, I’d also by that time developed a penchant for drinking.)  I payed £150 for the car and almost as much again to insure it for six months.  I remember the obnoxious insurance clerk gleefully laughing in my face when he quoted the premium and saw my ashen look of incredulous disbelief.  I hope he got really bad piles or something in later life.

I could go on (and on, and on) but this piece is too long already.  Funny how easy it is to talk about yourself!