An odd subject for a new-year message, you might think – but stick with me, all will become clear.  In the meantime, some lovely, seasonal  music – sung by a very talented guy and written by Frank Loesser, whose wife, incidentally, was once referred to as ‘The evil of two Loessers’.

As I mentioned in an earlier blog entry (see Which Reminds Me… – one of my better efforts, I reckon), the news media seem to use the fallow period between Christmas and New Year to list the people of note who assumed room temperature during the course of the year. So, in keeping with the tradition, I’ll talk about someone who died… several years ago.

The Boston-born cornettist Ruby Braff was quite simply one of the finest players I ever saw. I heard him very late in his career when, despite poor health limiting his range somewhat, he remained a stunning improviser. I felt him to be a real musical inspiration in that he succeeded in what I strive to do – play in the style of players a generation older but remain fresh and interesting. It was Ruby’s off-stage, permanently irascible persona that really amused and intrigued me though. He was known by certain musicians with whom he’d worked as ‘Mr Hyde and Mr Hyde’ with good reason.

My chum once found himself taking a nightcap with Ruby and another visiting American jazzman. A third party came up in conversation and Jazzman 2 said, “I can’t stand him, in fact I hate him.” Ruby countered with “I hate him more than you do.”

In another ‘friend of a friend’ situation, a certain gig promoter’s name was mentioned. Apparently Ruby became quite animated and explained, “You know, Harry Edison used to say ‘You can’t polish a turd’, and I never really knew what he meant… until I met that guy!” Incidentally, I once used the ‘can’t polish a turd’ line to a studio engineer friend whose pithy retort was, “Nope – but I can roll it in glitter.”

And so to the story of my one and only meeting with Ruby Braff:

I’d been put on the guest-list at a popular Soho jazz venue by a bass player of my acquaintance. When I arrived, the manager was unnecessarily officious with me which, in hindsight, was possibly a consequence of his recently having found himself the subject of a Ruby tirade. Anyway, my chum introduced me to the American star by saying, “Ruby, this is Peter Cook – an alto player who shares his name with a famous British comic”.  This obviously went straight over Mr Braff’s head and he responded with a loud “Huh?” “You know, Ruby,” someone started to explain, “Peter Cook and Dudley Moore”.  At this he looked up at me, pointed accusingly and declared, “I hope you’re funnier than Dudley Moore; he never made me fucking laugh”.  “Nice to meet you too, Ruby”… was what I thought.  If I’d actually said it, he’d almost certainly have said “Mr Braff to you!” (he even made a record with that as the title). 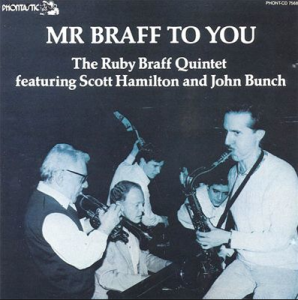 Ruby Braff’s obituary in The Guardian ended with the three words, ‘He never married’. Funny, that. Actually, his demeanour did have an amusing air about it, and when he played you could almost forgive him anything – honest!

And so to New Year…

Ruby Braff had just finished a New Year’s Eve gig when a punter approached him, thanked him for a lovely evening and wished him a happy new year. The ever-gracious Mr Braff responded with “Don’t tell me what sort of new year to have!”

I won’t, therefore, dare tell you what sort of new year to have, but I do hope you’ll be healthy and content in 2016.

I’ve not posted a blog entry for more than a year now, and have been touched by the number of you that have told me you miss it. It’s hard to believe I’ve been keeping it since 2007. It’s my only artistic outlet outside of music and I’m tickled to death that people actually take the time to read it – attention spans aren’t what they were. If you don’t believe me, check out how short the shots are in contemporary TV dramas. Some of the camera-work makes me positively queasy.

As ever, my online absence has been down not to my having been away, but to Apple’s enthusiasm for ‘withdrawing support’ for certain products. This euphemistically-put pain-in-the-arse accounts for my love/hate feelings towards them (see One Bad Apple). I love the elegance of their hardware and the design of their software, but I hate being forced to continue to spend money with them just because I expect their superior products to carry on working (wasn’t that a film with Bernard Breslaw?). Yup, mixed feelings… like watching your mother-in-law drive off a cliff in your new car. (Not bad – two paragraphs in after a fifteen-month absence and I’ve got an antiquarian music hall gag in already).

This, then, may turn out to be a temporary home for my blog until I get round to rebuilding my main website. Who knows? If I can get the comments bit working it might be like the good old days. So, although you may be reading my stuff for the first time as a result of an invitation, do feel free to chip in your two penn’orth – it’s often the catalyst for the next post. The rest of you (you know who you are), don’t be strangers!

Ok folks, back soon; and in the meantime here’s a link to my old blog archive: click here