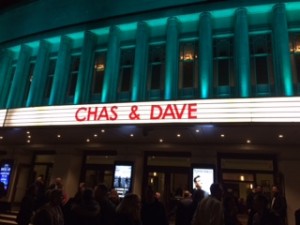 Another little photo-journal this time folks, and apologies if it’s somewhat ‘bitty’ but there is a thread running through it.

I did a Chas & Dave gig just before Christmas at The Hammersmith Apollo. This venue will always be, for me, Hammersmith Odeon. In it’s heyday, this 3,500 seat auditorium was a single-screen cinema. That’s probably a hard concept for a younger reader to comprehend, but in pre-tv times, that’s how popular the cinema was. I used to go to Saturday morning pictures at Hammersmith Odeon, where they used to show us ancient 1930s films of Flash Gordon starring Buster Crabbe (what a great name), and you know what? We lapped it up!

The Appollo’s dressing rooms are, as you would expect, very well-appointed but the corridors are not modernised and they consequently exude history – many of my musical heroes appeared here. I was particularly struck by a very old, hand-painted sign that declared ‘Dressing rooms must be vacated by 12 midnight’. Of course, in those days, things were expected to last, and sign-writing was a thriving trade. More about painted signs later.

There was until recently, close to the halls of learning at which I teach, an horologist’s shop. The place intrigued me as it had a real old-world air about it. It was very obviously a specialist shop with presumably no passing trade and this was borne out by the fact that you had to ring the bell to get in. That’s ultimately what prevented me from going in to browse. It’s also probably a good thing in that it prevented me from buying a vintage watch I don’t need. I felt a strange sense of sadness to see this shop go, but that was nothing compared to the sadness I felt when it became… you guessed it… an estate agent’s. This glorious relic, however, still hangs outside.

I love the way the building’s function is worked into its appearance.  Here’s another example I spotted just round the corner from home.  This building was presumably built by the Eldridge named – and one would hope he didn’t intend to move house at all. 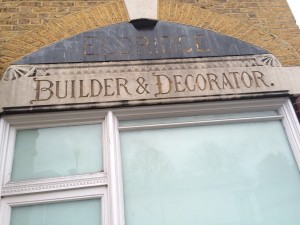 It strikes me that buildings in general used to be aesthetic as well as functional; a good example is this beautiful art nouveau balustrade I saw whilst gigging in the Park Lane Hotel (which, confusingly, is actually on Piccadilly). If you ever get the chance to see the ballroom there, take it – it’s spectacular, and one of my favourite rooms in London. 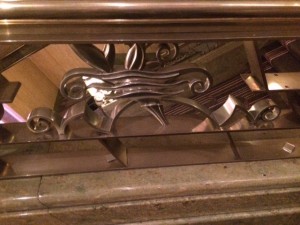 This is a detail from a shop in Sheen that’s now part of a small take-away pizza chain. Too bad their corporate identity required this to be painted all-over in green paint. When I was a kid it was a fish and chip shop and I remember my  grandfather stifling a grin whilst trying to convince me that the proprietor used to spit in the cooking oil to see if it was hot enough to start his evening’s frying.

My previous post spoke of my early-morning cycling sorties, and I’ve spotted a few interesting things whilst out on daybreak rides; firstly, this garage. 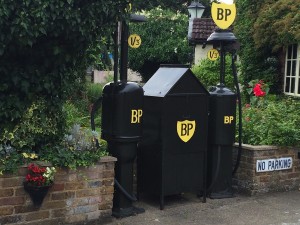 I’m fairly certain it must be a facsimile, but you never know…

Back to earlier business; in fact, a couple of ‘ghost signs’. These hand-painted signs probably became redundant decades ago but they survive and are the ‘Ghosts of London Past’ that this post’s title describes. Maybe they were covered with more modern advertising hoardings at some point. This one I saw in Richmond: 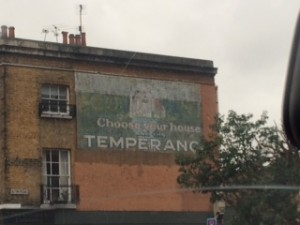 …and this one in Twickenham. It’s obviously advertising some long-gone eatery, and I’m intrigued by what an ‘invalid speciality’ might be. Any ideas?   And no gags about raspberry ripple ice-cream please. 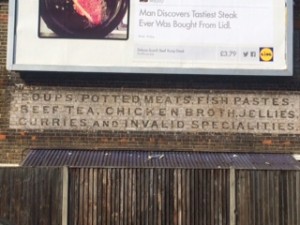 These signs piqued my interest and, just as I suspected, there’s a website dedicated to them.  It’s called www.ghostsigns.co.uk and it’s jolly interesting.

And finally.. also close to chez moi, another ghost of London past. I noticed these road ‘studs’ recently and, whilst I remember seeing these kinds of things when I was a young kid, by the time I started driving in 1980 they were pretty much extinct.  It just goes to show how infrequently the local council resurfaces the back streets of leafy suburbia. 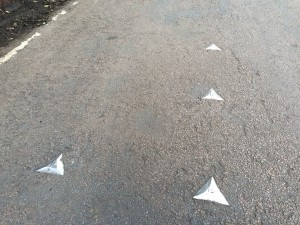 One thought on “Ghosts of London Past”